Dan Ingram’s legacy to the Churchill County Museum is one any Nevadan would be proud of. A Nevadan by choice, he came to Fallon to head the CCMA in 2015.  Produced originally as a memorial newsletter by the museum staff, it is reproduced, in part, on this website to honor the memory and achievements of this amazing man; deserving of a page in Nevada’s history.

Dan Ingram began work at the Churchill County Museum (CCMA) in late 2015 and soon developed a vision to showcase the Museum focusing on professionalism, technology, and modernization to deliver a unique experience to visitors.

One of the first purchases he made for the museum was a HP DesignJet printer which we’re relied on heavily for exhibit production ever since.  This has allowed us to make sleek, huge banners and signs in-house.  Not only has this improved the aesthetic quality of our temporary and permanent exhibits, but it also has allowed us to provide new services for local businesses and members of the community.

Sometimes we jokingly referred to Dan as Mr. Technology, and for good reason.  One of the factors that drew him to CCM was the institution’s history of being relatively early adaptors of several types of technology, including the use of push-button audio and DVD video in exhibits.  He brought in our digital photo booth, kiosks for our firearm exhibit, and our Lumoplay interactive floor.  All this technology is expensive, so luckily Dan was also great at getting funding.  At the time of Dan’s passing, we were hard at work fulfilling three different technological grants: one for a mobile app (which is now completed and can be downloaded on any app store), one for a pair of touch tables in our Truckee-Carson exhibit (coming summer of this year), and one for the Virtual Reality Hidden Cave being developed in conjunction with the Library.  He also built a mutual fundraising relationship between the Museum Association and the Library Association, which benefitted both organizations.  Dan laid the groundwork for fully integrating our museum into the digital age, and we will be continuing that into the future.

His focus on technology was not just for its own sake.  Instead, everything tied back into the user experience and making sure that we put our best foot forward as an institution.  He cared a lot about accessibility and guest comfort, and he always made sure that anything we did would be usable by as many people as possible.  All new exhibits could not have text too high or too low, and it all had to be short and readable.  He also put in a lot of work to update our branding and image.  He launched a contest to redesign the logo in 2016, which resulted in what we have today.  This logo was complemented by changes to our website so that everything meshes neatly.  He also found or designed many of our most iconic pieces of merchandise, starting with our Hearts of Gold Cantaloupe mugs up through the Season’s Greetings face masks from last year.  He was never afraid to take a risk and try new products either, up and including creating and publishing a children’s book entitled The Adventures of Beatrice Badger on the Lincoln Highway written by Gretchen Felte and illustrated by Cathie Richardson.

It should not be surprising that Dan had a real interest in digitalization and Internet presence.  He spearheaded efforts to digitize our journal, IN FOCUS, and made it available on our Omeka page (ccmuseum.omeka.net). One of his goals was to scan our entire newspaper collection and make it available online.  Due to the sheer number of pages, that work is still ongoing.  However, we were able to complete the digitization of our oral history collection, which are being uploaded.  This project kicked into high gear at the start of the pandemic last March, as did efforts to create virtual exhibits on our Omeka page.  In many ways, the app we recently completed serves as the culmination of that goal to allow people to visit the museum without having to make the journey here.

While Dan’s fingerprints are (metaphorically) all over the visitor experience, there is perhaps even more that you probably won’t see when you stop by.  Dan was instrumental in accepting the generous gift of the Nygren Estate and the purchase of the property at 1150 S. Maine Street.  Though it is currently being used for storage, his hope was to turn this house into an interpretive site, showing what life was like in the 1950s here in Fallon.  He updated every computer in the building significantly improving our ability to do the behind -the-scenes work necessary to maintain a collection and build new exhibits.

The years of 2018 and 2019 were pivotal period for the museum.  In July of 2018, Dan revealed the new strategic plan for CCM.  This plan looked at the museum’s shortcomings and charted a course to address these issues in the next five to seven years.  That same year, Bunny Corkill, Barbara Hodges, and Tom Bartel retired with Jennifer Jones following in the spring of 2019.  That amount of staff turnover in such a short period can easily sink any institution, but Dan didn’t let that happen.  Instead, he saw that as an opportunity to change the staff structure.  To that end he successfully lobbied the county to create two full-time curator positions.  The bid was successful, and in 2019 the museum welcomed Raeburn Sottile and Marilyn Goble.  Both of them brought their official training and youthful eagerness to the museum.  Dan was invaluable in helping them transition into their first full-time professional roles and teaching them tricks of the trade that their graduate school curriculums had missed.  Gretchen Felte replaced Jennifer as education curator.  With her experience as a teacher and enthusiastic personality, fit right in.  And Donna Cossette continued in her role as registrar and Native American subject expert.  Dan knew the value of his staff and never forgot that we were human.  He was willing to be flexible and take our expertise and opinions into account.

In our winter newsletter from 2016, Dan talked about buying the red chairs we use for events and remarked “If I do nothing else in my tenure as Director, I will be remembered for the more comfortable chairs.”  Personally, I think it’s telling that there was so much to say about Dan’s accomplishments that the chairs completely slipped my mind until I saw that.  The chairs are one small part of a much larger trend taking place at the CCM.  Dan’s accomplishments created a sleeker, more modern institution that cared about making its space as comfortable and accessible as possible to its visitors.  We all wish that Dan was still around to see the completion of the projects he set in motion, as well as what this museum will look like in the next 5,10, or 15 years.  Sadly, we must instead remember him fondly as we move into the next chapter of the Churchill County Museum and strive to do him proud. 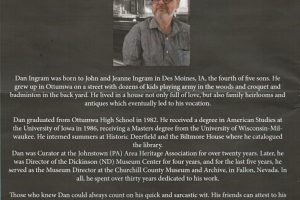 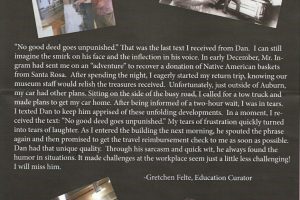 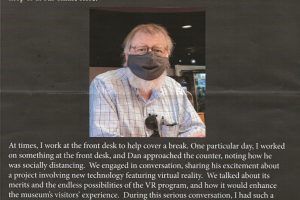 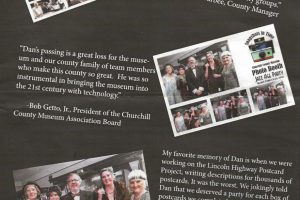 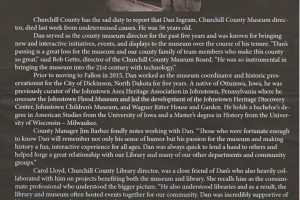 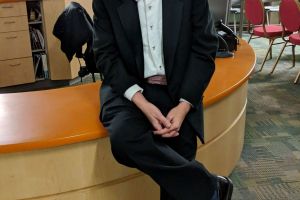 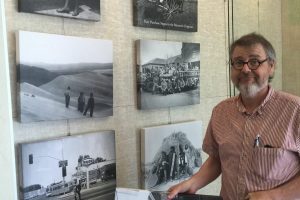 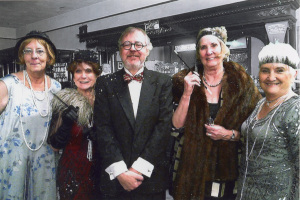